Powder Ridge has a Freestyle Program for every athlete whether you are sliding your first box or launching the big air.

Our Developmental Freestyle Team program is an 8-week program on Saturday and/or Sunday mornings, for kids aged 6-14 who want to go big and fast.  Certified coaches guide participants through a progression of drills designed to develop all around skiing and riding skills. The developmental program will introduce the fundamentals of both racing and freestyle with a focus on developing a solid skill foundation.  Older participants will be given the opportunity to focus on their preferred discipline.  At the end of this program, participants receive Certificates of Completion and receive an assessment of readiness to transition to the Competition Teams from their coaches. 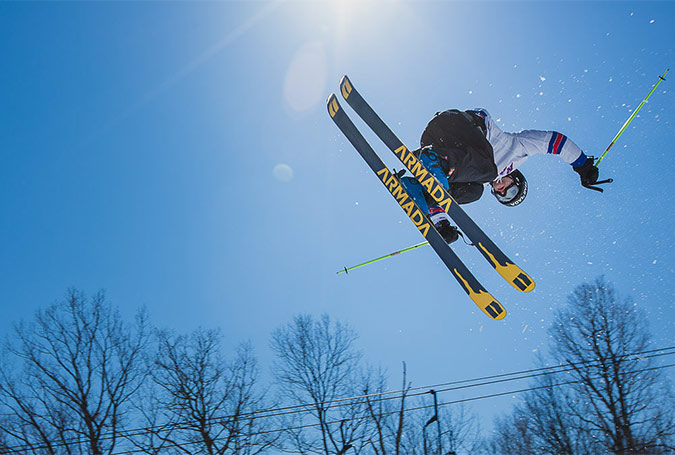 Get your freestyle on at Powder Ridge. We have competitions each winter.

We are excited to announce that Kyle Kolbig will be the new head coach for our freestyle snowboard program.  He is a Connecticut local who spent the last ten seasons coaching the freestyle team at Stratton Mountain, VT.  He has successfully guided riders from entry level park skills to nationally ranked rippers.  His snowboard pedagogy is based on personalized progression plans with safe fun at the core.  Kyle has even found himself on numerous podiums at The Vermont Open for Rail Jam, Slopestyle, and Halfpipe competitions.  His experience teaching snowboarding led to an overall love of teaching.  So much so that he obtained a masters degree in education from the University of Connecticut and teaches High School when not on the snow!

Chad has been skiing for over 27 years. As a member of the US Ski Team he trained in aerial skiing in Lake Placid starting at the age of 10. He began to transition to park skiing at 15. In college, Chad competed in diving and is a 13 time All American athlete. After college he coached diving for several years before returning to freestyle skiing full time. Since then, he has built and managed several terrain parks and freestyle programs over the last seven years.